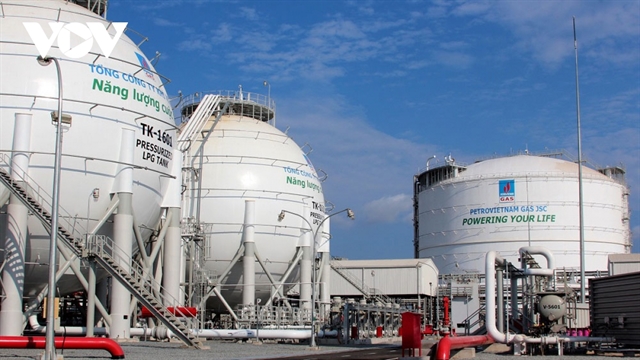 The prospect for LNG imports into Việt Nam over a 10-year horizon is strong. Photo vov.vn

HÀ NỘI — The outlook for Việt Nam's emerging liquefied natural gas (LNG) sector remains promising as the country's need for the product is large to serve its power development plan, according to Fitch Solutions.

According to a recent report by the international financial services provider, Việt Nam is one of several new LNG markets in Asia that are forecast to begin first imports in the coming decade as the country looks towards the fuel to replace declining domestic production and replace pollutive, environmentally-harming fuels in the energy mix.

Having been historically self-sufficient in natural gas, Việt Nam's need for LNG imports is large and growing, and stems from fast declining output across mature offshore fields, a slowdown in exploration and the lack of access to any cross-border pipelines.

A number of large-scale developments on the horizon, including Cá Voi Xanh (Blue Whale) and Block B-O, could add significant volumes of new output and in turn, reduce the future need for imports if successfully developed.

Fitch said the prospect for LNG imports into Việt Nam over a 10-year horizon is strong. Hypothetical LNG imports are forecast to see exponential growth from less than 1 billion cubic metres (bcm) to over 4bcm over the next decade, next to a more than doubling of domestic gas demand and growing utilisation across power generation and industries.

The main drive behind stronger gasification in Việt Nam will come from the State. Việt Nam's newest State power development plan (PDP), the draft PDP VIII (2021-2030) was published in February 2021 and sets higher targets for gas and other renewables in the domestic energy mix for the decade ahead. PDP VIII affirms in writing Việt Nam's nascent support for the clean energy transition, and outlines the ambition to increase the share of cleaner-burning gas in the national power generation capacity composition to 21 per cent by 2030 (under the base-case scenario) from about 10 per cent in 2020.

In order to achieve these targets, Việt Nam is aiming to reduce contributions from domestically produced coal (albeit coal imports look set to remain elevated) and hydropower (with developments shifting in favour of small-scale hydro) which despite lower cost and stable supply, contribute to air pollution and cause environmental damage.

The rise of new LNG markets such as Việt Nam is bullish news for global suppliers, such as the US, Qatar, Australia and Russia – all large exporters which are aiming to expand their respective LNG exports to global markets in the coming decade.

The level of interest in Việt Nam's LNG sector from foreign parties remains strong. PDP VIII estimates about US$128.3 billion will be needed over the next decade, in order to achieve the natural gas and renewables targets. The plan estimates 74 per cent, or about $96 billion, would need to go towards the development of power sources such as LNG, solar and wind to make the targets feasible. About $56 billion worth of LNG related investments, or 23 different LNG-to-power projects, have been proposed and announced in Viet Nam.

According to Fitch, continuing to attract more up-front investments and strategic investors will be crucial in order for Việt Nam's LNG sector to live up to its full potential, which based on current projections could prove considerable. — VNS

Việt Nam’s power development plan to boost LNG sector have 590 words, post on vietnamnews.vn at October 6, 2021. This is cached page on Movie News. If you want remove this page, please contact us.