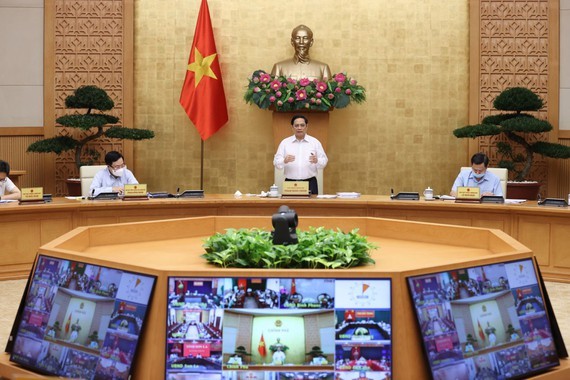 Prime Minister Pham Minh Chinh speaks at the event.
In September and the six first months, HCMC has been severely hit by the Covid-19 outbreak, causing severe consequences on the economy, supply chains and also producing negative effects on the quality of life of residents, said Chairman of the municipal People's Committee Phan Van Mai at the regular Cabinet meeting on October 2.
As of now, the city has made great efforts to basically put the outbreak under control and got significant results.
The locality has gained 75 percent of the budget collection target, and maintained credit growth and capital mobilization of over VND 3,000,000 billion, up 4.7 percent compared to the end of 2020. The production and export values of high-tech industrial zones attained US$16.2 billion, presenting an increase of 12.5 percent compared to the last period.
In addition, guarantee of national defense, social and cultural activities, especially the spirit of solidarity and sharing offering support to needy people have been promoted.
Beside achievements, retail sales value and the index of industrial production dropped 17.4 and 12.9 percent respectively while the disbursement of public investment capital just reached 32 percent, leading the decline in GRDP by 4.82 percent in the third quarter.
In the fourth quarter, HCMC will focus on prevention and control measures of Covid-19 and gradual economic recovery plan that will be simultaneously carried out along with the Government's resolutions.
Firstly, the city will concentrate on the implementation of the Directive No. 18 on continued prevention and control measures against Covid-19 and gradual economic recovery.
Secondly, the priority will be given to the production sector, followed by the city's key services, and other areas creating large production and export value and outstanding contribution to the budget. The city will also support medium and small enterprises affected by the pandemic to resume production activity and create job for local people in districts that have achieved all Health Ministry criteria to “basically control the pandemic".
Thirdly, the city will resolve problems and prepare solutions to boost the disbursement of public investment capital and encourage private investment, striving to achieve a target of disbursing public investment capital by 95 percent for 2021.
Fourthly, the city will try to achieve the highest budget collection target of over 90 percent.
Fifthly, the municipal authorities will implement welfare activities supporting people affected by the pandemic, especially old people who live alone, orphaned children, laborers lost job; and ensure national defense and security
Speaking at the meeting, Prime Minister Pham Minh Chinh said that he pandemic has been basically brought under control nationwide, including the hardest-hit areas of HCMC, Binh Duong, Dong Nai and Long An that have recently seen a sharp decrease of new cases. However, vigilance should be maintained while recovering socio-economic activities.
Regarding to jobless workers who are trying to flee to their hometowns, he noted that localities continuously encourage people to stay, create job and offer them Covid-19 vaccination, as well as help them stabilize living conditions. He also highly Vinh Phuc and Tien Giang provinces where safely received their local residents.

HCMC strives to achieve budget collection target of over 90 percent have 680 words, post on www.sggpnews.org.vn at October 3, 2021. This is cached page on Movie News. If you want remove this page, please contact us.