When George Harrison went into the studio in 1970 to make All Things Must Pass , he was a man on a mission. He'd spent years waiting for this moment. George had so many songs saved up from his years in the Beatles, when he was limited to two or three songs per album. By now, he was sitting on a massive stash of material he was burning to share with the world. So he made sure nobody could ignore his definitive solo statement—the massive triple-vinyl classic All Things Must Pass . All over the album, you can hear the exhilaration as all his pent-up creative energy runs wild. The Quiet Beatle was emerging from the wreckage of the band, but with so much confidence and ambition, he suddenly sounded like the one who had it all figured out.

All that ambition is heard loud and clear in All Things Must Pass: 50th Anniversary. The Super Deluxe version has five CDs, including two of demos and another of studio outtakes. The original album has been remastered, thanks to executive producer Dhani Harrison and engineer Paul Hicks. The Uber Edition comes in a wooden crate, going all the way for George devotees: it's got a wooden bookmark made from a fallen oak tree in his garden. It also has replicas of the gnomes from the album cover. In an exclusive preview for Rolling Stone , George's masterpiece is full of revelations and previously unheard treasures. People used to argue whether this triple album should have been edited down to one or two records—but this edition makes you believe it should have been a quadruple album.

It wasn't his first solo album—he'd already released the synth experiment Electronic Sound and the Wonderwall soundtrack. But this is where he found his voice and took it to an epic scale. Even in the tossed-off jams or folkie dirges, you can hear his fierce determination not to get trapped in the past. In May 1970, when he first cut demos for the album, it was still an open question whether the Beatles were over, and George was the one taking the high road. "I think there may be what you'd term a little bitchiness," George said diplomatically in an April 1970 radio interview. "It's just being bitchy to each other. Childish. Childish."

He had good reason to feel confident. The world was still in shock from Abbey Road, the Beatles's biggest album yet, where he stole the show with "Something" and "Here Comes The Sun." As John admitted in NME, "George has got songs he's been trying to get on our records since 1920. He's got to make an album."

The first day of demos was George at Abbey Road, backed by two trusted old friends—Ringo on drums and Klaus Voorman on bass. They banged out 30 songs that day; the next day he did 15 more solo acoustic demos for producer Phil Spector. The demos are full of major songs, many of which would have fit perfectly on the album. "Nowhere to Go," cowritten with his friend Bob Dylan in 1968, lays out his disenchantment with the rock-star hustle.  "I get tired of being Beatle Jeff / Talking to the deaf," he complains, in his poetic sneer. "I get tired of being Beatle Ted / Talking to the dead / Every time some bobby's getting blown."

There's a wonderfully snide outtake of "Isn't It A Pity" where he sings, "Isn't it so shitty / Isn't it a pain / How we do so many takes / And now we're doing it again." There's also an early take on "Beware of Darkness" where he sings "Beware of ABKCO," a dig at the Beatles' new management, perhaps already showing a degree of disenchantment with Allen Klein.

But the overall vibe of the music is sheer excitement. The demos include stripped down versions of "What Is Life (even better than the final album  version) and "All Things Must Pass," with just George and his acoustic guitar. He digs into country blues with "Woman Don't You Cry For Me." The original album has never sounded better, with classics like "My Sweet Lord," "Wah-Wah," and his benevolently affectionate love song to the Beatles' girl fans, "Apple Scruffs." Here's an exclusive tour of the 10 most revelatory moments on All Things Must Pass: 50th Anniversary Edition.

This stately hymn was written back in 1966, but it became the centerpiece of All Things Must Pass, and arguably his greatest solo moment ever. This outtake is more tranquil and serene than the more grand versions on the album.

A great spiritual rocker that he demoed for the White Album—it really should have made the cut instead of "Piggies." Harrison never released the song himself, choosing to donate it to his old pal Jackie Lomax, who turned it into a U.K. hit. This version is the closest we've got to a definitive Harrison version, just him and his acoustic guitar, with a bluesy edge.

A songwriting collaboration with Bob Dylan, dating back to 1968. You can hear his seething anger as he rails against the strictures of celebrity life, with echoes of his 1969 drug bust when he sings, "I get tired of policemen on the prowl / Picking in my bowel / Every time somebody's getting high."

This guitar meditation not only should have made the original album—it would have been one of the highlights. Harrison writes his own Indian hymn, chanting the names of the Lord, but his acoustic guitar has a deeply Celtic drone. Not far at all from what bands like the Velvet Underground or Fairport Convention were trying at the time.

Another acoustic demo that would made a top-tier song on the album. It's that's a surprisingly upbeat spiritual ditty, with Harrison singing, "Im waiting in the queue to go the cosmic empire / I want a front-row pew at the cosmic empire.

"Take it, Jojo!" George yells in this surprisingly joyful bash at a song from his former band, full of affection for both the song and the lads. During the solo, he calls out to longtime aide-de-camp Mal Evans with a request: "Mal, get a mop and another glass of orange juice!"

George opened the original album with a Dylan song, "I'd Have You Any Time," and also covered "If Not For You." This would have been the album's third Dylan tune, a song full of regret ("I don't want to do it / I don't want to say goodbye") that might have hit too close to home in the disintegration of the Beatles. George revisited the song years later to finally give it an official release—on the soundtrack for the 1985 teen-trash comedy Porky's Revenge. The Eighties, man.

A disarmingly romantic folk tune, with a touch of Smokey Robinson in the melody and the intricate touch of his own songs from Rubber Soul. It's still a work in progress, which is probably why he salted it away for his 1976 solo album Thirty Three and a Third—it took his wife Olivia to inspire him to finish it. (The album had another great Robinson tribute, "Pure Smokey.")

"Many roads can take you there, many different ways," George sings in this light-hearted spiritual chant. "One direction takes you years / Another takes you days." It was inspired by India—Dhera Dhun is near the Maharishi's base in Rishikesh—as George likens pilgrims to "beggars in a gold mine."

"Wedding Bells Are Breaking Up That Old Gang of Mine"

One of the most comic moments in the whole box: George steps out with this jaunty version of an old standard from the 1920s. The song must have hit home for him at the time, given the Beatles' split. (It also haunted John, who quoted it in his "Lennon Remembers" interview in Rolling Stone , and Paul, who played it in the Anthology.) You can hear his affection for people and things that went before. But there's no sadness in it. He's a new man, ready to face the future, making the most confident music of his life. 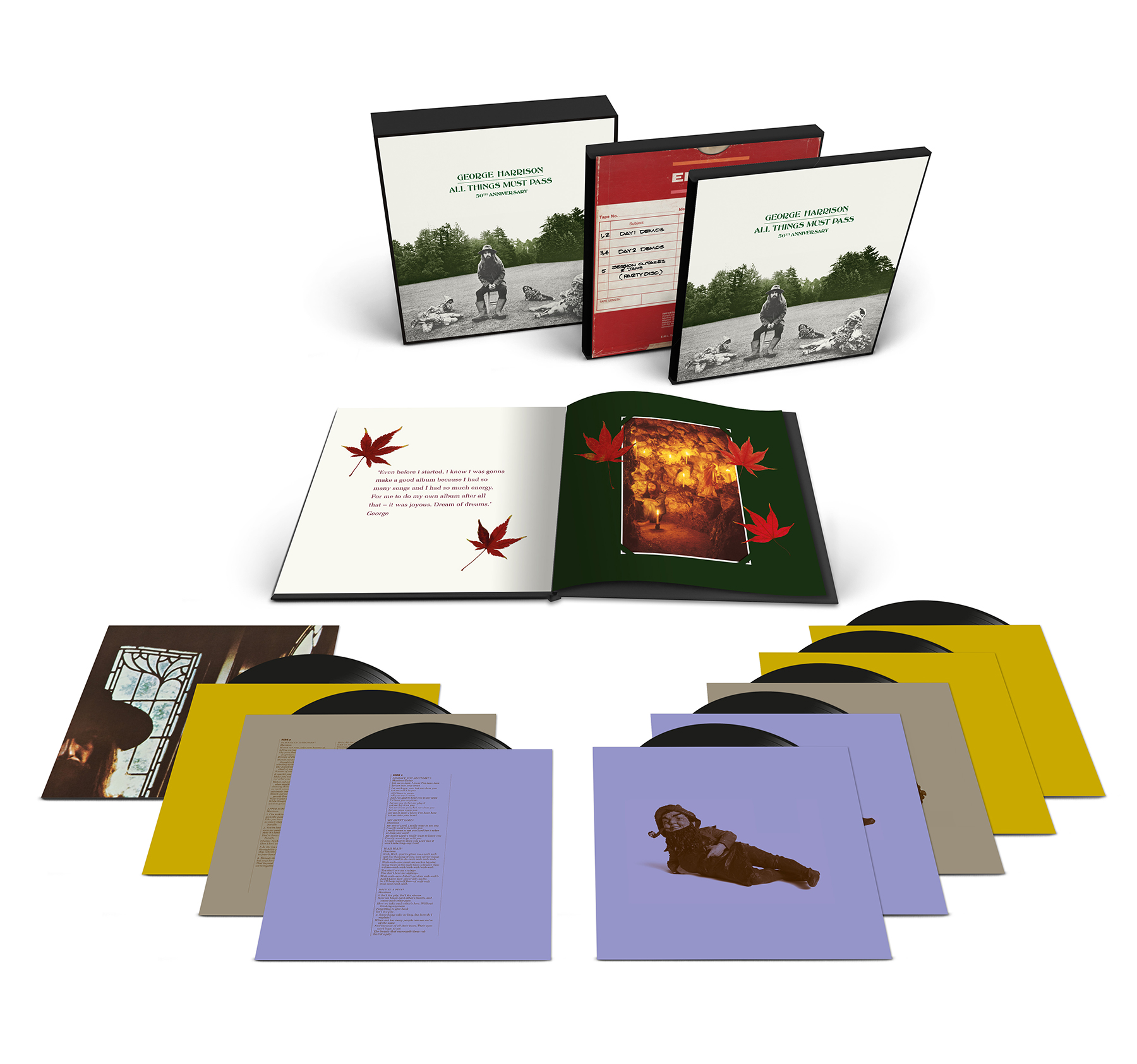 George Harrison’s New ‘All Things Must Pass’ Box Set: An Exclusive Guide have 1891 words, post on www.rollingstone.com at July 30, 2021. This is cached page on Movie News. If you want remove this page, please contact us.