Over the course of this week, two European film festivals announced that they’ll be honoring U.S. actor Johnny Depp for his artistic contributions to cinema.

On Monday, the San Sebastian Film Festival in northern Spain announced that Depp would receive its Premio Donostia honorary prize on September 22. It cited Depp as “one of contemporary cinema’s most talented and versatile actors” with a reputation for playing “almost always misfits.”

This was followed on Tuesday when the Czech Republic’s Karlovy Vary Film Festival said it would honor the actor’s “extensive career and lasting legacy” later this month, describing him as an “icon of the contemporary cinema.”

These announcements have drawn the ire of female filmmakers and domestic violence charities alike.

Cristina Andreu, the president of the Spanish Association of Women in Cinema and Audiovisual (CIMA), said the San Sebastian Film Festival award was inappropriate while Depp is on trial for allegedly assaulting his ex-wife, actress Amber Heard .

The presumption of innocence applies, Andreu told the EFE news agency, “We’re just saying that it’s not the right time to give him an award before we really know what happened.”

Women’s charities in the United Kingdom also have also voiced their objections to these awards.

Referring also to the Spanish award, Solace Women’s Aid public affairs manager, Erin Mansell, told the BBC that when perpetrators of domestic abuse are lauded for their professional achievements despite evidence that they have assaulted current or former partners, it sends a misleading message to survivors that the abuse doesn’t matter. 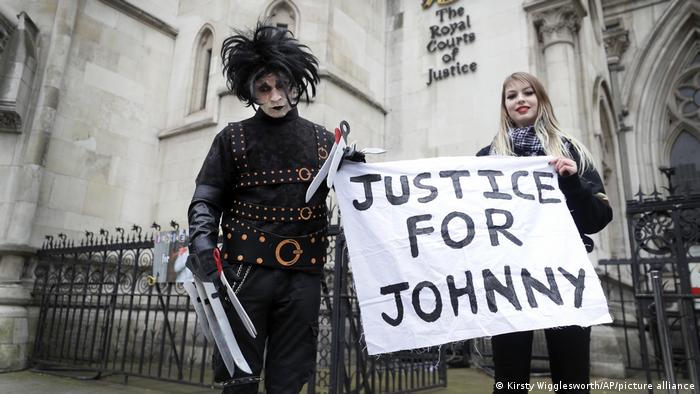 Johnny Depp supporters hold a banner outside the High Court earlier this year during his libel hearing against tabloid, ‘The Sun’

“The decision to award this lifetime achievement prize is particularly insulting in the wake of a year where domestic abuse spiraled under conditions needed to address a global pandemic.”

Cinematic art should be honored

In contrast, the director of the San Sebastian International Film Festival, Jose Luis Rebordinos, told EFE that the festival’s function is not to judge the behavior of filmmakers “but to honor those people who have made an extraordinary contribution to the art of cinema.”

Depp, who has been nominated for an Oscar three times and won a Golden Globe among many other awards, has been embroiled in protracted legal battles with Heard, who has accused him of domestic violence.

The two stars tied the knot in 2015 after meeting on the set of “The Rum Diary” in 2009. A year later, in 2016, Heard filed for divorce and accused Depp of domestic violence.

In August 2016, a $7 million settlement was reached, which Heard claimed she would donate to the American Civil Liberties Union and Children’s Hospital in Los Angeles. In 2019, Depp sued Heard and lost a $50 million defamation lawsuit after she wrote about her experiences in an article in The Washington Post .

The 58-year-old had also lost his libel suit against the British tabloid The Sun that had called him a “wife beater.” A High Court ruled last year that the newspaper’s article was “substantially true” and that 12 of the 14 assaults attributed to him had “taken place.” It was, however, not a criminal case.

Depp, however, recently won a lawsuit that will force Heard to reveal if she did donate her divorce settlement money as she’d previously claimed. 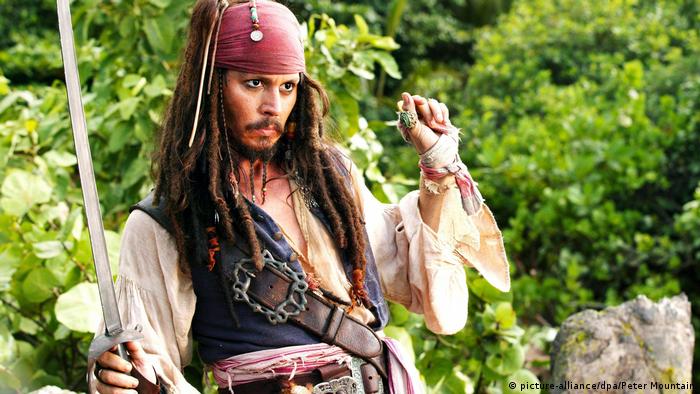 Known for playing kooky characters, his Captain Jack Sparrow was one of his most iconic

Having repeatedly maintained his innocence, Depp and his lawyers have accused Heard instead of attempting to gain financially from him. If it is revealed that Heard didn’t go through with her promise of donating her settlement, it could be used as evidence against her character in their divorce battle.

Depp’s career has slumped since with Warner Bros dropping him from the lineup of the third installment of the “Fantastic Beasts” franchise, written and produced by Harry Potte r author J.K. Rowling . Danish actor, Mads Mikkelsen, took on the role of Grindelwald, and the film is scheduled for release in 2022.

Depp was also removed from the sixth installment of the wildly successful Disney franchise, “Pirates of the Caribbean”in which he played the iconic Captain Jack Sparrow.

Uproar over honorary awards for Johnny Depp have 846 words, post on www.dw.com at January 12, 2021. This is cached page on Movie News. If you want remove this page, please contact us.