On the morning of December 7, Chancellor Willy Brandt laid a wreath at the memorial to the Warsaw Ghetto. It commemorates the courage of the thousands of Jews who lost their lives in the ghetto in a desperate bid to free themselves from their German oppressors. Brandt straightened the ribbon attached to the black-red-gold funeral wreath. He took a couple of steps back. Seconds passed.

And then he fell to his knees, his head tipping forwards slightly. Remaining still on the cold granite. The photographers gathered closer, knowing the image they captured would go around the world.

“Faced with the abyss of German history and the burden of the millions who had been murdered, I did what we humans do when words fail us,” was how Brandt put it in his memoirs.

He went down on his knees like a sinner, in a reference to Christian imagery. He prayed, that Germans might be forgiven.

Willy Brandt, a Social Democrat who had been part of the resistance against the Nazis, was praying for forgiveness for his people. So, was the gesture planned? “No, it was not,” insisted Brandt. “My close aides were no less surprised than the reporters and photographers who were standing right next to me.”

The Polish government was also taken by surprise, says Krzysztof Ruchniewicz, professor of history at the University of Wroclaw: “Until then it had always been the ‘evil Germans.’ They were seen as revanchists and warmongers,” he explains. “And then there was suddenly a German chancellor, who knelt down signaling an openness to atonement.”

Poland’s government understood the gesture as a step towards reconciliation. “But there was party propaganda that resisted any move to accept it as an opportunity to revise the negative image of Germany.” 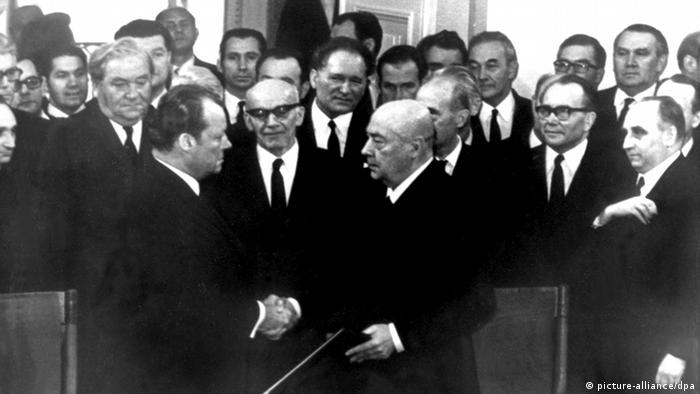 Willy Brandt signed The Treaty of Warsaw in 1970, accpeting the loss of former German territories that had become part of Poland after World War II

No majority for Brandt’s gesture

What ordinary people made of it all, says Ruchniewicz, is difficult to say. “A lot of Poles probably didn’t have the slightest idea of what was going on.” Photos of the famous genuflection were not printed in Polish newspapers. It was only later that Brandt’s policy of reconciliation began to have an impact.

And in Germany? “Brandt’s gesture breached a taboo,” says historian Kristina Meyer from the Federal Chancellor Willy Brandt Foundation. “You could call it a game changer in terms of German society’s efforts to come to terms with its Nazi past. After all, there was still no majority of Germans who were ready to ask for forgiveness for the crimes committed by the Nazis. A survey from 1970 indicated that every second West German rejected Brandt’s gesture, seeing it as an exaggerated act. 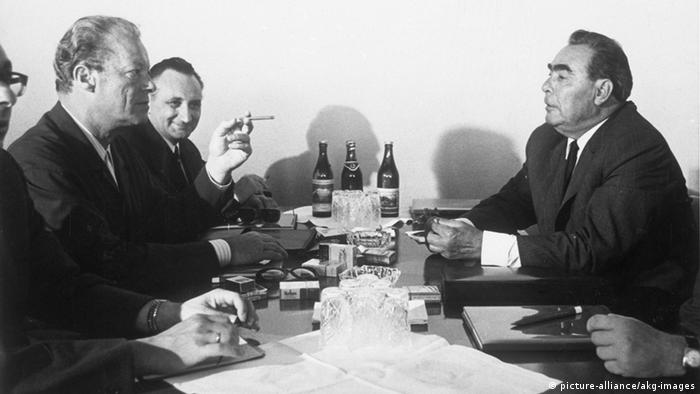 ‘Ostpolitik’ — In 1971 Willy Brandt met Soviet President Leonid I. Brezhnev in Crimea about ways to promote peace in Europe

During his 1970 visit to Germany’s eastern neighbor, Brandt also signed the Treaty of Warsaw. By signing it, the West German chancellor accepted the loss of former German territories in Eastern Europe that had become part of Poland after World War II. This was rejected by opposition conservative parties in the then-West German capital, Bonn. Some far-right extremists even vilified Brandt as a “traitor.”

With hindsight, most historians agree: what became known as Brandt’s “Ostpolitik” — which aimed to gradually improve relations with Eastern Europe — was a key step on the road to German unification in 1990.

“The de facto recognition of the Oder-Neisse line [today’s border between Germany and Poland: Eds.] provided a shared foundation for political rapprochement,” argues historian Meyer. “And in this way, Brandt’s Ostpolitik was a milestone on the difficult road to reconciliation between East and West in the Cold War.” It was, she says, the starting point for developments that first led first to the peaceful revolutions in Poland and East Germany, then to German reunification, and finally to a real partnership: “Partnership between Germany and Poland in a united Europe.” 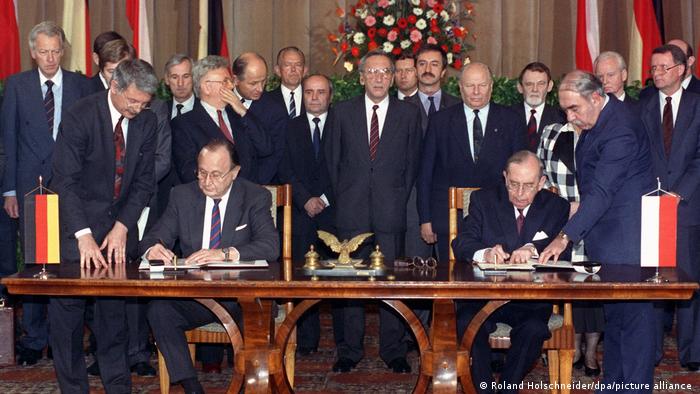 That, at least, was the mood on both sides of the border until relatively recently. But after six years with the ultra-nationalist Law and Justice Party (PiS) in power in Warsaw, many people now tend to see both the Polish-German partnership and Brandt’s genuflection in a very different light.

Words like mistrust, alienation, or paralysis feature in many current headlines when it comes to Polish relations with Berlin. All too often, it seems the shadows of the past are again gathering. The latest bone of bitter contention is a planned memorial center in Berlin for German crimes against Poland during World War II.

“From the perspective of the last few years, I can only see the genuflection as an empty gesture,” PiS politician Arkadiusz Mularczyk tells DW. “It means nothing. What sort of an apology is that for crimes that were committed, when there has been no compensation for Poland?”

Mularczyk, a member of the Polish Parliament, heads a commission tasked with formulating reparation claims that will be put to Germany for crimes that took place during World War II. 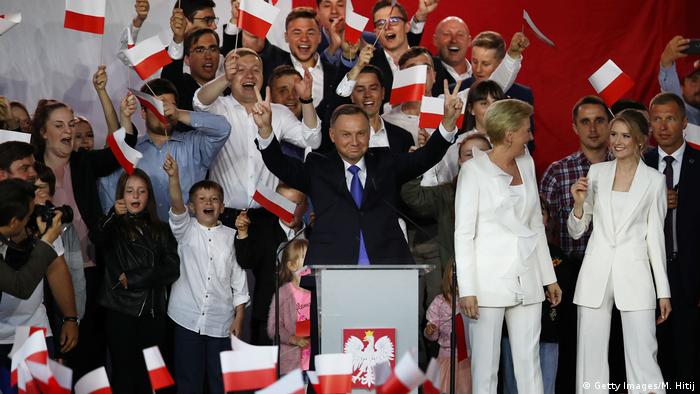 “For years now, there have been such German gestures in relations with Poland. But as far as I’m concerned, it is all just a sham,” Mularczyk believes. “In the Second World War, nearly as many Poles were killed as Jews. Still, Jewish citizens living in the USA or Israel are eligible for compensation. But not the Poles.”

Of the estimated 6 million Polish citizens who were killed during World War II, 3 million were Jews. A total of 6 million Jews were killed in the Holocaust.

“The Germans only want to give the impression that they are willing to apologize. But it all comes to nothing,” says PiS politician Mularczyk.

This narrative has become a powerful force in today’s national-conservative Poland, as has the widely held opinion that Berlin’s gestures are really designed to benefit Germany’s image of itself and its standing abroad, and not the people of Poland.

In a statement to DW, the Polish Foreign Ministry was more diplomatic: With Willy Brandt’s spontaneous gesture in 1970 Germany accepted its responsibility for the war crimes it committed in Poland. But “if we want to remember such gestures today, we should also talk about concrete steps for reparation, which is necessary on the path towards real reconciliation,” the statement from Warsaw reads.

“When I look at how relations currently stand between Germany and Poland, it reminds me of 1970,” says Polish historian Ruchniewicz. “Of course, that was a different time. Today, there are no border disputes; we are both part of the European Union; Poland and Germany have signed treaties with each other. But the symbolic components that Brandt’s gesture of reconciliation brought with it don’t run very deep.” 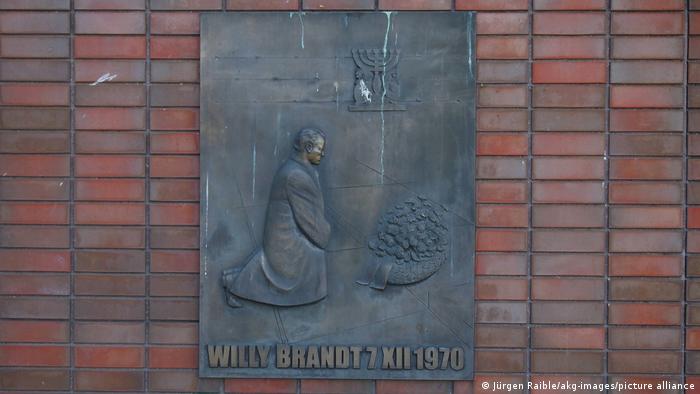 In Germany, there is a two-euro coin to commemorate the genuflection. There is also a commemorative postage stamp, and conferences and speeches will be held. The anniversary will also encourage historians like Ruchniewicz to discuss the achievements, or shortfalls, that the Treaty of Warsaw brought with it.

As for the Polish government? Ruchniewicz says nothing is planned.

But does that moment of dramatic political symbolism inspire people today? At Warsaw’s Willy Brandt Square, just 200 meters from where history was made, there is a memorial plaque to the event of 1970. The bronze has acquired a patina. But Brandt’s face shines as if it were freshly polished. There is no doubt about it: Many of the people who come here feel a strong need to touch the kneeling chancellor.

This article was translated from German.

Poland and Germany: 50 years since Willy Brandt's historic gesture have 1520 words, post on www.dw.com at January 6, 2020. This is cached page on Movie News. If you want remove this page, please contact us.