It's been 50 years since that terrifying night in August 1969, when four members of the Manson Family broke into the house at 10050 Cielo Drive and killed five people: 18-year-old Steven Parent, who wast there to try to sell a clock radio to an acquaintance in the property's guesthouse; Wojiciech Frykowski, an aspiring screenwriter and friend of director Roman Polanski; Abigail Folger, Frykowski's girlfriend and the heiress to the Folger coffee fortune; celebrity hairstylist Jay Sebring; and actress Sharon Tate, Polanski's wife, who was eight months pregnant at the time of her brutal murder. The night after, Manson family members followed up their brutal killings with the murders of Leno LaBianca, a well-to-do grocery store owner, and his wife Rosemary, stabbing them dozens of times and writing "Healter [sic] Skelter" in blood on the wall.

What came to be known as the Tate/LaBianca murders stunned Hollywood — and the country — with the public wondering what could have prompted the killers to commit such a gruesome crime and many celebrities wondering if they would be next. Months later, the arrests of members of the Family and the group's leader Charles Manson prompted more questions than answers. Why were these houses targeted? What did they hope to accomplish with the murders?

While prosecutors successfully argued that Manson had brainwashed his followers into committing the murders as part of an attempt to incite a race war, the mysteries surrounding the Manson family murders linger to this very day, inspiring countless films, documentaries, and books attempting to get at the heart of the question: how could one man hold so much power over his followers that they would be driven to kill for him? And was he even responsible for ordering the murders in the first place?

With the July 26 release of Quentin Tarantino's Once Upon a Time…In Hollywood, a new generation of armchair detectives is now devoted to uncovering the mysteries of the Manson case. If Wikipedia and podcasts aren't enough to slake your obsession, here are the 9 best books about the Manson murders, from the classics to the lesser known works exploring the cultural context of the Manson Family and its aftermath.

Helter Skelte r by Vincent Bugliosi (1974) Helter Skelter remains to this day a fundamental resource for anyone interested in the case. 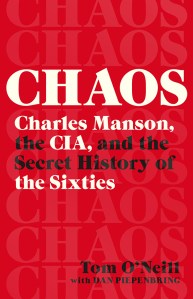 Chaos: Charles Manson, the CIA, and the Secret History of the Sixties , by Tom O'Neill with Dan Piepenbring (2019) Premiere magazine article assignment given to O'Neill nearly 20 years ago, Chaos is less a straight account of the Manson murders than a fascinating, dizzying, at times frustrating array of all of the alternative theories surrounding the case, from the suggestion that the murders may have been the result of a drug deal gone sour to the theory that Manson was a participant in CIA-sponsored LSD mind control experiments. While such theories are by no means proven, and vary wildly in terms of their believability, O'Neill does an excellent job at poking holes in the Helter Skelter narrative (not to mention the reliability of Bugliosi, who died in 2015) and forcing readers to reassess what had already been viewed as the definitive take on the case.

Manson: The Life and Times of Charles Manson , by Jeff Guinn (2014) Manson is most notable for Guinn's interviews with Manson's family members, including his sister and his cousin, neither of whom had been interviewed before. The book casts light on Manson's extremely troubled childhood (he was a juvenile criminal who bounced from reform school to reform school, and reported being raped several times by older students). While it doesn't conclusively identify the origins of Manson's evil — a feat that would be impossible — it does render him a fully three-dimensional figure, a major departure from previous efforts depicting him as a crazed, cold-blooded killer.

Member of the Family: My Story of Charles Manson, Life Inside His Cult, and the Darkness That Ended the Sixties, by Dianne Lake (2017)

The Family , by Ed Sanders (1971) The Family is arguably more thoroughly researched, though not quite as restrained, as Helter Skelter: it's replete with rumors and urban legends, not just about the Family but about the victims themselves, much of which could potentially be viewed by modern readers as victim-blaming. But for those who just can't get enough of more details on the case, The Family is a font of information, even if not all of it is well-sourced or even all that valuable.

Manson in His Own Words: The Shocking Confessions of 'The Most Dangerous Man Alive' , by Charles Manson and Nuel Emmons (1988) Whatever your thoughts on Charles Manson — was he a psychopath or stooge? A calculating con man or a raving lunatic? — it's hard to deny that he did a pretty great job keeping journalists on their toes. Prone to hours-long, koan-filled rants, Manson, who died in 2017 , could pivot from utter incomprehensibility to eloquence on a dime. Eamons, who had grown up in California, had met Manson when they were both incarcerated in the state. But by the 1979 was a photojournalist, and decided to reach out to his old acquaintance. The culmination of eight years of correspondence between Manson and Emmons, Manson In His Own Words is neither unbiased (it is, after all, presented entirely from Manson's perspective) nor is it always comprehensible. It does, however, bring Manson to life in ways that a standard true crime investigation simply could not.

The Manson Women and Me: Monsters, Morality and Murder , by Nikki Meredith (2018) The Manson Women and Me, journalist Nikki Meredith interviews two of the remaining women behind bars for their role in the murders — Leslie Van Houten and Patricia Krenwinkel — and attempts to answer a question that has haunted many followers of the case: how did these two relatively normal, middle-class girls become coldblooded killers, to the degree that they were unrepentant even as they stood trial for their crimes? Meredith does not purport to answer this question, but she does display remarkable empathy for her subjects while weaving in other case studies on brainwashing and groupthink to attempt to explain, if not justify, their actions.

Restless Souls: The Sharon Tate Family's Account of Stardom, the Manson Murders, and a Crusade for Justice , by Alisa Statman with Brie Tate (2012) Restless Souls is far from an objective account of the Manson murders, but it does provide an intimate glimpse at how the Tate family coped with the trauma of their loss as well as a look at Tate herself, who by all accounts was a sweet, ebullient young woman whose light was snuffed out far too soon.

9 Best Books About the Charles Manson and the Family Murders have 1232 words, post on www.rollingstone.com at August 1, 2019. This is cached page on Movie News. If you want remove this page, please contact us.