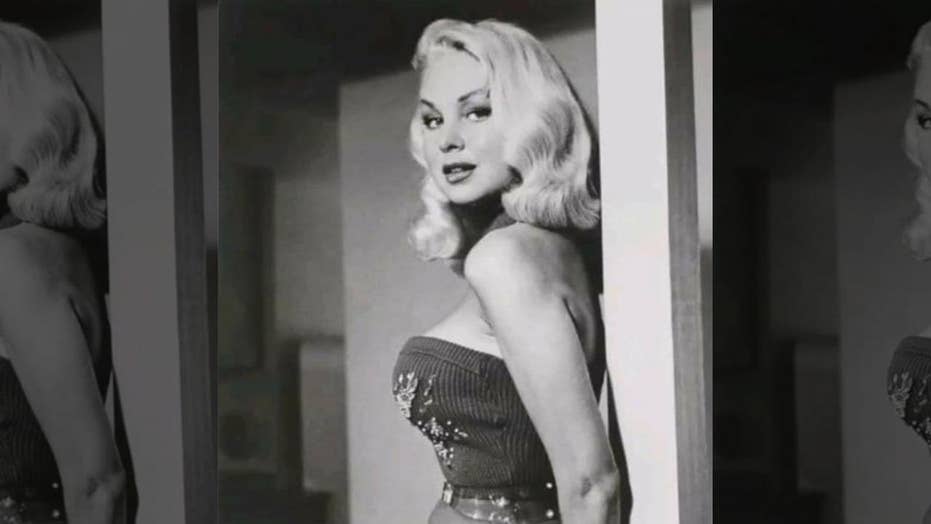 Joi Lansing’s confidant Alexis Hunter talked to Fox News about her life and her 2015 book about the starlet called ‘Joi Lansing: A Body to Die For.’

In 1969, then-20-year-old Alexis Hunter, who went by Nancy Hunter at the time, found herself dressed in a monkey suit on the set of 1970's "Bigfoot" when blonde bombshell Joi Lansing walked on set and forever changed her life.

Lansing, who had skyrocketed to fame in the 1950s alongside Marilyn Monroe , Jayne Mansfield and Mamie Van Doren , would pass away just four years later at age 44 (the press listed her as 37) from cancer.

Hunter developed a close and secret bond with the film and TV star during the remainder of her life, a relationship she detailed in her 2015 book "Joi Lansing: A Body to Die For."

April 6 would have been Lansing's 91st birthday.

American actress and pin-up model Joi Lansing (1928 – 1972) with an admirer, circa 1955. She is wearing shorts and fishnet stockings. (Silver Screen Collection/Getty Images)

"I met her on the set of a terrible film called 'Bigfoot,'" Hunter recalled to Fox News. "I was one of the monkeys. Here I am in this monkey suit for such a low-budget stinker of a film. They were gluing hair on my face, spray-painting me and applying these fake teeth. It was just awful. And in walks in this unbelievably beautiful human being. She sat right next to me as they did her hair and makeup. And she was so sweet. She didn't take herself seriously. She was just like anybody. She just happened to be exquisite."

Lansing was just 14 years old when she was discovered and signed for MGM’s talent school, The New York Times previously reported. While attending the University of California, a writer for the Bob Cummings television show spotted her. For five years and 125 shows, Lansing played Shirley Swanson on "Love That Bob" from 1955 until 1959 which led to numerous movie roles and nightclub appearances.

Some of Lansing's other screen credits included "The Brave One," "Hole in the Head," "Marriage on the Rocks" and "Klondike," among others. She also embarked on tours alongside Bob Hope , in which she entertained American servicemen.

"She was the Marilyn Monroe of television," said Hunter. "She did tons and tons of TV shows. And at that time, there were only three stations. She was on all the time."

Among her many roles, Lansing played Gladys Flatt in "The Beverly Hillbillies" from 1963 until 1968. However, the actress found herself struggling to find work as the appeal of Hollywood's blonde glamour girls began to fade. Monroe died in 1962 at age 36 from a barbiturate overdose and Mansfield passed away in 1967 at age 34 after a car crash.

Joi Lansing with “granny” on “The Beverly Hillbillies.” (Courtesy of Alexis Hunter)

“You didn't expect someone in Hollywood to be so sweet and unaffected by their persona or image,” said Hunter. “She was just like anybody else you would ever meet."

Hunter said that same year, 1969, she started working as a go-go dancer at a local nightclub in hopes of earning big bucks quickly. Excited about her latest gig, Hunter called Lansing and invited her to stop by.

"There I am on this elevated little stage with chairs surrounding it," recalled Hunter. "In walks Joi. She sits down. She was alone and totally dressed to the nines. She sat there as I'm dancing away. 'My Girl' by The Temptations comes on. She looked at me and calls me down to whisper something in my ear. She tells me, 'You don't belong here, let's get out of here.'"

Hunter alleged the two women headed over to Lansing's place, where they happily listened to music. That's when she claimed they became more than friends.

"Suddenly she kissed me," said Hunter. "It shocked me because Joi was straight. But it was just one of those magical things that happened. She had been married three times, had numerous affairs and always loved men. But there was some magic that happened between the two of us."

Hunter alleged she and Lansing were in a romantic relationship from 1969 until her death in 1972. However, she said they kept things under wraps. Lansing was also married to her third husband, business manager Stan Todd. That union also lasted until her passing.

"If anyone had known in Hollywood about our relationship, that would have destroyed her career," said Hunter. "So we had to pretend to be sisters. Luckily, we both were blonde and had the same color green eyes. People bought it. And we were very discreet. We didn't go to parties. We pretty much stayed to ourselves.

To the press, Hunter was Rachel Lansing, the actress' beloved sibling. But behind closed doors, Hunter learned how much of Lansing’s coveted curves held her back as a performer.

Hunter alleged that by the mid-1960s, Lansing privately resorted to silicone injections in hopes of giving her career a boost. To the public, Lansing credited pumping iron to making her bustline increase.

"She thought it would set her apart, which it did," said Hunter. "This was before people were really doing breast implants… She was voted by the armed forces as the pinup they wanted in their locker. She was spectacular. And she played it. But she didn't want to be just a sex symbol. She wanted to be taken more seriously."

The New York Times shared that while Lansing proudly publicized her measurements, she regretted it in her later years.

"Being blonde and curvy, you might say, was kind of a mixed blessing," said Lansing. "I was always known as a glamour girl and categorized only as that. It was very limiting. I was held back by my image."

"There just weren't many parts for glamour girls," explained Hunter. "And what good parts could you get in your 40s at the time? She's not your typical mother. Frankly, there weren't great parts for women at the time, unfortunately. She wanted to be taken more seriously. … but she didn't have much of an opportunity."

Hunter also shared that Lansing's husband, who had been her business manager, made her miss out on a role that could have changed the course of her career.

"She had really poor management, which was a real problem," claimed Hunter. " Lucille Ball wanted to put her under contract because Joi was a great comedienne. Her comedic timing was excellent. And Lucille Ball saw the potential. But her management, who happened to be her husband at the time, stupidly said, 'No, you're too good for this.' So she ended up doing bit parts on TV."

The New York Times shared Lansing was operated on in 1970 for cancer. While she recuperated, the deadly disease returned two years later.

Joi Lansing during her early years. — Courtesy of Alexis Hunter

"They discovered the breast cancer," said Hunter. "She also had an ovarian tumor. She had surgery and the doctors didn't think she would ever leave the hospital. … She started to do very well with chemotherapy and was able to leave the hospital. We had a wonderful time after that. She did a few TV shows and some theater. … But during the last six months of her life, things started to go downhill. She didn't suffer terribly, which was really a blessing."

Lansing died at St. John's Hospital in Santa Monica. In Hunter's book, she claimed Lansing passed away in her arms. She also insisted Todd still wasn't aware of the relationship.

"He thought we were just great friends," said Hunter. "And I was there to help Joi. He was a good guy, but he couldn't handle seeing her so sick like that. Her mother couldn't take it either."

Joi Lansing and Stan Todd getting their marriage license in 1960. (Photo by Los Angeles Examiner/USC Libraries/Corbis via Getty Images)

Hunter dedicated her book to Leslie Todd, Lansing's stepdaughter, whom she said inspired her to finally tell her story. According to Hunter, Lansing had confided in Leslie before her passing and confessed the two women were lovers.

Fox News reached out to Lansing's first-cousin John Shupe, who was close with the actress, in regards to Hunter's claims. He also supported the book.

"I have read the book 'Joi Lansing: A Body to Die For' and found no incorrect information," Shupe wrote to Fox News. "I didn't know everything going on in Joi's life, but what I do know fits with the details within the book."

Hunter, who has since retired from modeling and acting, hopes her book will offer readers a new perspective on a beloved Hollywood star who has been seemingly forgotten over the years.

"The great thing about Joi is that her beauty radiated from inside," said Hunter. "She was a kind, good human being who just wanted to shine."

‘50s actress Joi Lansing had secret romance with young starlet, regretted being a sex symbol, book claims have 1983 words, post on www.foxnews.com at April 4, 2019. This is cached page on Movie News. If you want remove this page, please contact us.