No doubt about it: The 1980s was a strange time to channel surf. Those neon-tinted, big-haired, irony-free days have provided Internet curio-seekers with fodder for infinite terabytes of grainy, colorful ephemera. And one of the cornerstones of weird Eighties television was "Gorgeous Ladies of Wrestling " (G.L.O.W. for short), an all-female pro-wrestling league whose exploits were filmed in Las Vegas and syndicated nationwide.

It's the type of retro-kitsch from the Reagan era could have vanished down the YouTube black hole – until Netflix resurrected it, sort of. The cult grappling-females show from yesteryear is monkey-flipping its way back to the surface in GLOW, the new series created by Liz Flahive and Carly Mensch and executive produced by Orange Is the New Black 's Jenji Kohan. Starring Community and Mad Men alum Alison Brie , the ensemble dramedy features a diverse cast of ass-kicking actresses — and enough hairspray and spandex to send you straight back to 1985. (The entire 10-episode first season hits the streaming service today.)

"We both come from a theater background, so the theatricality of

Created by promoter David McLane and director Matt Cimber to cash in on WWE craze that was a hallmark of Eighties entertainment, the real-life G.L.O.W. featured a motley assemblage of women wrestlers fighting cooked-up battles in deliciously outlandish costumes. They represented a variety of body types, races and backgrounds, and sported monikers like Babe the Farmer's Daughter, Little Fiji, Zelda the Brain, and, uh, Stinky. It was simultaneously exploitative and liberating, a friction that makes it ripe for dramatic adaptation.

"My stunt double was trying to break down the move; she was like, 'When you feel your vagina hit [wrestling trainer] Chavo Guerrero's

Flahive ( Homeland, Adult Beginners ) and Mensch ( OITNB, Weeds ) were both writing for Showtime's Nurse Jackie when they first came across the phenom via Brett Whitcomb's 2012 documentary GLOW: The Story of the Gorgeous Ladies of Wrestling. They'd been looking

"I love Ruth. I sympathize with her," Brie says, calling in from L.A. "I feel like I've been her. I like not kill yourselves before you maybe get these roles?’"

When it came to the actual headlocks and body slams, Flahive and Mensch were looking for actors who were game to learn how to wrestle and do their own stunts when possible. To coach the performers, GLOW tapped none other than Chavo Guerrero Jr. of the legendary Mexican-American wrestling family. (His uncle Mando Guerrero was a trainer for the real-life G.L.O.W. fighters in the Eighties.)

Brie, who had no previous wrestling experience before signing on, 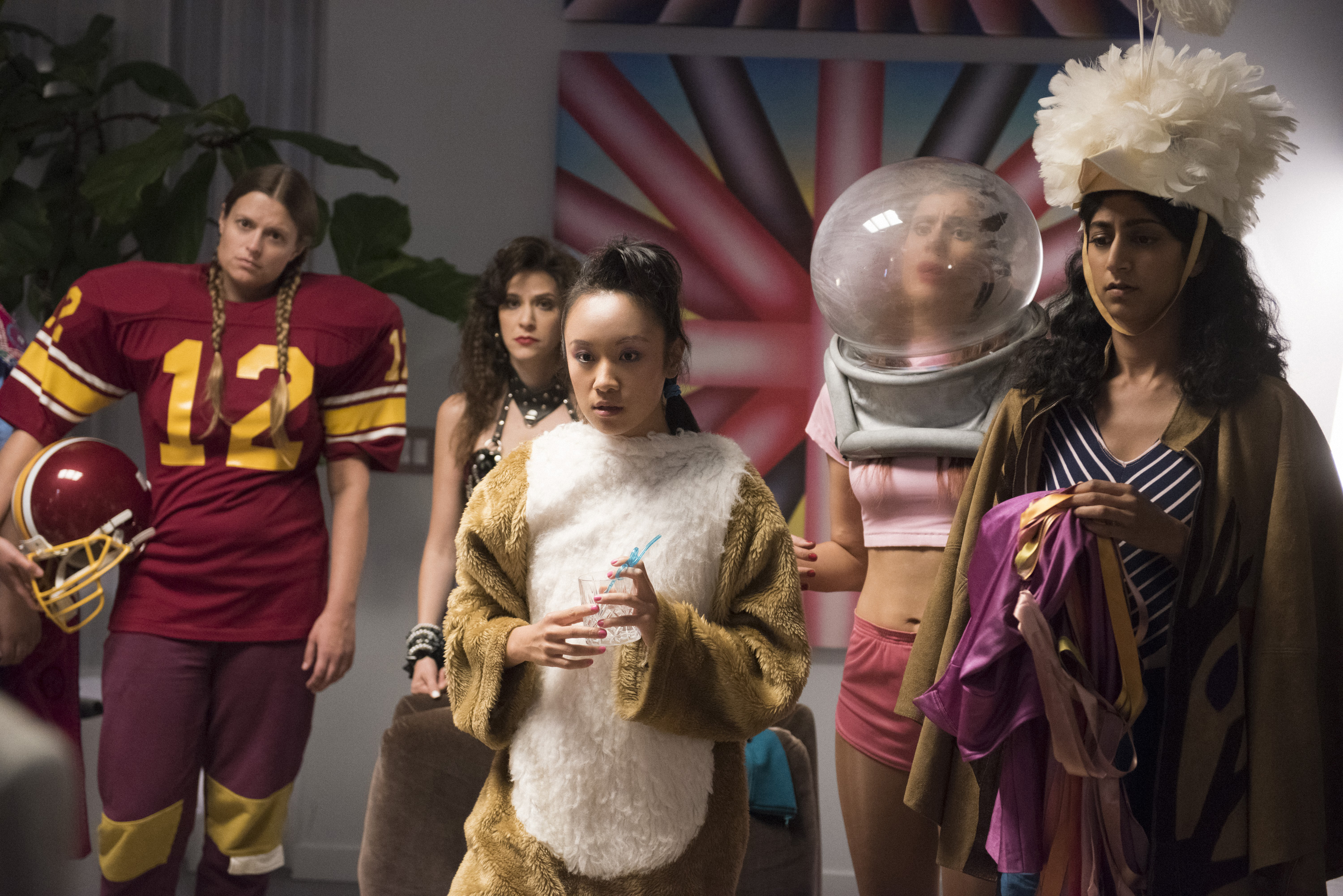 The world of women's wrestling – particularly in the GLOW era – is portrayed in the series as being simultaneously exploitative and empowering. The women in the ring walk the line between being scantily clad objects to gawk at and performers given an arena to express themselves in a brash, physical way. The show also plays with the crude, racially charged stereotypes of wrestling personas and lets its characters find power in subverting them.

"Thinking about where the line is in wrestling in terms of what's funny and what's offensive," Mensch explains, "that gave us a kind of permission to take on some more uncomfortable things and examine them and play with them. That tension was something we never wanted to resolve. We wanted to keep it alive and use it as the motor for a lot of our storytelling."

"It's not about women tearing each other down," says Brie. "It's about women working together to find themselves. And the thing that they're making, in whatever way that men are going to interpret it, whether it's exploitative or what, they aren't seeing it that way. They are really feeling like superheroes in the ring, and finding their voice and their inner warrior."

And u nlike most modern shows set in the Eighties, the show feels like a true period piece rather than a slick slice of nostalgia. Both the glam and the grit of the era are on display, from the tricked-out mansion of a manchild producer (Chris Lowell) to the worn leotards and scuffed sneakers the women wear to wrestling practice. For inspiration, the creators watched movies like The Legend of Billie Jean (1985) and The Apple

Flahive and Mensch are also quick to note that they were drawn to the era not just for its aesthetic, but also the significance of the historical moment to the story they wanted to tell. "We wanted to look back on the Seventies – coming out of the women's movement – and into the Eighties, and ask the question: Did it work? Did things get better?" Flahive says. "We were pitching the show pre-Trump, and we went into the pitch saying things like, 'This is a great time for women. We're about to elect our first female president.' So a sort of double looking back is something that's really present in the show."

Even though women didn't end up being in charge of the country, they were most certainly in charge on the GLOW set. And according to Brie, being part of a female-dominated production created a space where it felt safe to take chances. "It felt unlike any set that I had ever been on," she says. "It was such an open, warm, environment, and very encouraging and comfortable. I think that was important, because we were taking a lot of risks with our bodies, in a literal way in the ring – and we needed to feel protected and safe. The women owned the set. It was our set."

Get in the Ring: How ‘GLOW’ Recreates the Golden Age of Lady-Wrestling TV have 1211 words, post on www.rollingstone.com at June 23, 2017. This is cached page on Movie News. If you want remove this page, please contact us.